The Race of Remembrance. More than just a race they say...

Organised by Mission Motorsport, the Forces motorsport Charity, 'RoR' is a unique event where the race is only half the story. Put simply, it is the most unique, poignant and remarkable race weekend on the British calendar.

The Wrexham Glyndwr University Students of Together, We Progress Racingwere due to enter two cars, but the ongoing questionable reliability of the Teams Mk3 MX5 meant that only the Mk1 car was entered.

The car had seen significant work all season to prepare for this final showdown, not least brand new Meister R #ClubRace suspension - an upgrade from the Zeta CRD+ units the car has used all year. The new shock/damper combination proved to be game changing with all three drivers (all of whom have very different driving styles) reporting positive feedback. The car, it appeared, was truly running on rails!

With a large spares pack provided by our Title sponsors MX-5 Parts and the accumulated knowledge of how our engine, gearbox and diff was running (via spectral analysis) from our friends at FUCHS Lubricants UK we had never arrived at a race meeting better prepared...

Free practice and qualifying proved that the Team had pace. Actually, too much pace and the race Directors decided to bump the Team up from Class D (1800cc) to Class E (2000cc) meaning the 22 year old MX-5 was now up against much newer, faster, more powerful cars. In essence, the pressure was on!

As is the spirit of the event, the Class move was not contested; quali times proved that the TWP car was between seven and nine seconds a lap quicker than it's rival entries (all BMW Compact Cup cars). We wanted a race, not a whitewash...

Race Report - Into the Night

As is the way with the British Automobile Racing Club the lights went out exactly on the scheduled 3pm start with TWP Racing having qualified 12th on the grid of 49 and staying out of trouble on the tight first corner.

The Team soon realised that the Class competitors were much quicker - five seconds quicker in fact - but there was a long twelve hours to go so David Smith settled down into the first 1hr 16min stint and kept  (relatively!) clean on the congested 2.1mile International Circuit.

On the first scheduled driver change the Team discovered a slow puncture on the nearside-front so as well as fuelling and driver change an unplanned front axle tyre swap was also completed. Minimum pit-stops are regulated to four minutes and the previous days practice showed its value when Nick Dougill joined the track after just 4:48, amazing considering the extra burden of the wheel change.

Nick was soon setting blistering lap times - well up on those we expected to see and again testament to the set-up - and he pitted on schedule (minus the splitter, his second of the weekend!) to swap with Graeme McMurchie.

The brief (to both the Team and drivers) pre-race had been "tonight is about survival, the race starts tomorrow morning", and that was proving sage advice. Multiple Safety Cars and track density meant that the Team picked up two stop-go penalties - a 30sec and a 1min - for passing under yellow flags; having watched the in-car footage post-race it's plain to see how the signals were missed but, as they say, it is what it is and the Team pressed on, trying to chase down fourth in Class.

With less than an hour to go before the pause in proceedings for the night David (now back in the car for his second stint) missed his breaking point due to traffic and barrelled across the hairpin into the tyre wall square-on. The car lost three laps whilst it was recovered by the ever-eager (not to mention heroic!) Marshals and David limped back to the pits, the car looking more rally-cross than race!

Motorsport can be brutal, and to the casual observer the 'enthusiastic' use of some (very) large hammers may have appeared a tad over-zealous, however with some beating and a lot of speed-tape the car returned to track. Considering the impact speed the Team was actually amazed by the lack of serious damage, what they would learn later was that the mud and detritus from the various off-track excursions  and five hours of racing was actually hiding more.

The flag dropped at 9PM and the cars returned to the pits battle-weary. It was going to be a long night in the TWP garage but we were comfortably holding fourth in Class and clearly had the pace for more. If we could turn the car around... 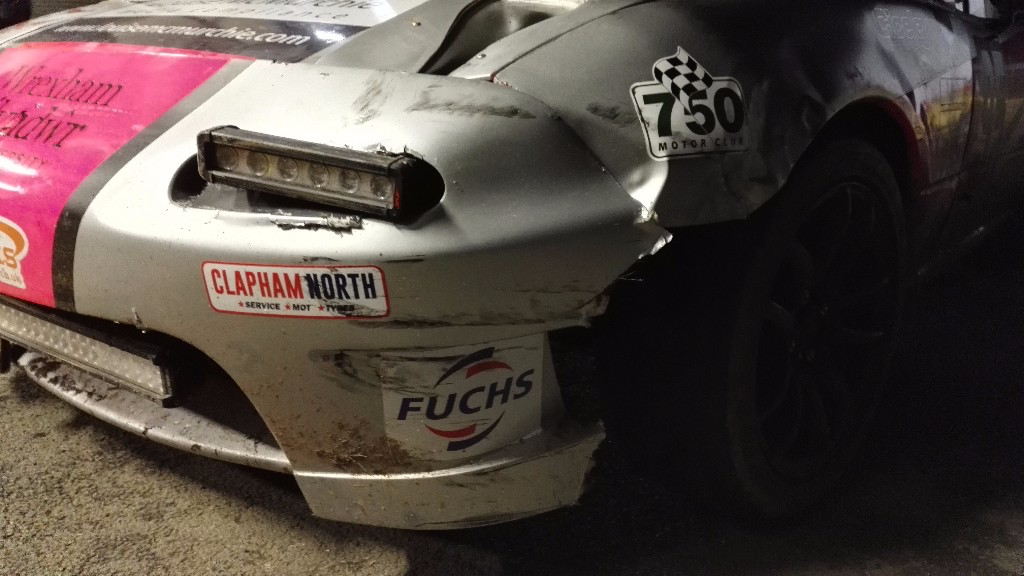 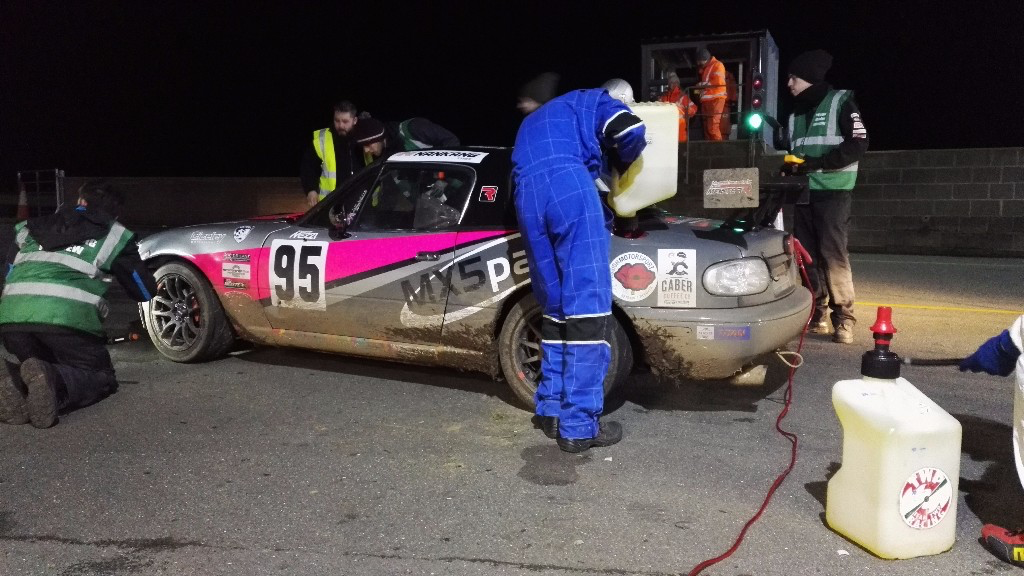 Race Report - Into the Day

To be precise freezing, sleety-rain. With ten minutes before the cars had to be in the formation area the pit-garages echoed to the sound of rattle-guns as tyres were swapped-out for wets...it was going to be one of 'those' days!

The Team had done an incredible overnight job, not just turning the car around but getting some well-deserved sleep too!

The rolling re-start proved uneventful and the car settled back down into a steady rhythm on the wets, setting impressive times under the guidance of Nick. The scheduled driver change at 09:36 saw Graeme back in the car but the changeable weather was giving the Team a headache. Half the field was on wets, half on drys but the lap-times of those on the dry option suggested pace. The previous pit-stop had highlighted low brake material on the nearside rear caliper and the pit-wall was reporting squealing from the car as it braked so the decision was made to throw our 'joker' pit-stop (regs stated we had to perform nine stops, we only needed eight) in order to swap-out to dry tyres and fix the brake issue. On sorting the issue the Team discovered a sticking piston, meaning a very hot caliper and rotor and we had eaten a new set of pads in 36 minutes, not to mention incredible teamwork to get the car back out in under five minutes!

Graeme returned to track to finish his stint but, on the scheduled driver change to David, reported that the car was very twitchy on the greasy surface (tyre temps also proved that we weren't getting the heat into the Nankang AR-1s to really turn them on. But the weather radar suggested the weather was improving so David continued on the dry option and completed his stint trouble-free.

By now the Team was up to third in class and maintaining 16/17th overall with the opportunity to close the (ever increasing) gap to second looking unlikely. Lap upon lap the drivers aimed for consistency and the car kept delivering until we saw the Class leader come into the pits unexpectedly and be pushed into the garage. The difference was 11 laps, so if they stayed in for 21 minutes we'd un-lap oursleves. At 17 minutes the '55 Roddisons car passed our garage heading back out to track, now in second rather than Class lead (now held by the Sheard Racing no18 car) but still safely ahead of us. Motor racing is a strange sport; friendships off the track are balanced finely against the will to win and both cars ahead of us were owned by very kind people that have quietly assisted the Team behind the scenes, we didn't want them to win, but then we didn't want them to lose either!

With the final hour ticking away, the Class-leading '18 car came in under a black-and-orange flag; the car was spilling fuel and two attempts to fix the issue meant that the gap between the Sheard Racing and Roddisons Racingteams was closing fast, with it we too were gaining time and un-lapping ourselves to within three of the Class leaders.

In the end it came down to maths; we didn't have the time left to complete enough laps for the win and we resigned ourselves to third place. In the heat of the battle 'resigned' may sound a negative, but remember we were in a Class above that which we expected to compete. Of that Class we would have finished first, a full seven laps ahead of the nearest rival!

After the dissapointing (financially, almost season-ending) visit to Spa, the Team really needed a decent result;

"To say it's been a challenging year would be an understatement. There's always 'stuff' going on behind the scenes that isn't necessarily apparent on the surface, but with the added complications of an academic calendar, Student availability and even the most minor logistics problems such as  floor space we've worked hard alongside the University to give our Students every opportunity for success.

As a University Team, Together, We Progress Racing has taken the Wrexham Glyndwr Students into Europe, raced against established, professional teams (we shared a garage with an Aston Martin Vantage team at one point...and beat them!) but it has only been possible due to the hard work - not to mention trust in my son Will and I - of the University management and the sheer, absolute grit and determination of the Students.

An absolutely, heartfelt thank you to all our Sponsors, supporters and friends this season. Without you we simply wouldn't be where we are now.

So, onto next year.

What it will bring we honestly have no clue. Simply put, we need a bit of luck to survive the Winter financially. But we're not just building a Team here but a story, a legacy...we have to be back!

TWP: Together, We Progress. In partnership with Wrexham Glyndwr University.

A Mountain to Climb